Stats from SwitzerlandMobility.ch (http://www.veloland.ch/en/routes/etappe-01647.html): 37km long, about 300m height difference in either direction. Their site has the full profile. Shares its path with Eurovelo 5 (http://www.viaromeafrancigena.com/stages/crossing-the-alps-1)

We biked in the opposite direction, after having spent the night in Lugano. Because of the short bike day ahead, we passed a few hours browsing through the city, despite the bad weather.  The promenade along Lago di Lugano is beautiful, with the old town to one side and the spectacular lake view to the other. Here the lush wooded hills plunge steeply into the lake.

The old town cityscape is very interesting, with its mixed architectural styles (from old and neoclassical to modern buildings) and random plan of pedestrian alleys. The wealth of the city (third financial centre in Switzerland) is felt through the well maintained neoclassical and Italian-style buildings, squares and arcades, manicured parks, designer shops and holiday atmosphere in general. There is definitely a Mediterranean flair to it. 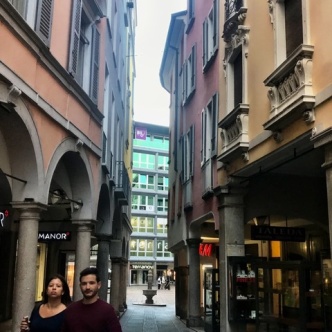 One should not leave Lugano without seeing the splendid Catholic church of Santa Maria degli Angioli on the lake promenade. Its building (16th century) is in itself a contrast to the modern constructions and designer shops surrounding it. Inside, one enters a mystical dark place brought alive by outstanding frescoes. Indeed, it contains the most important fresco of the renaissance in Switzerland , which covers the entire partition wall of the church. It was painted by a Lombard master (Bernardino Luini) in 1529. 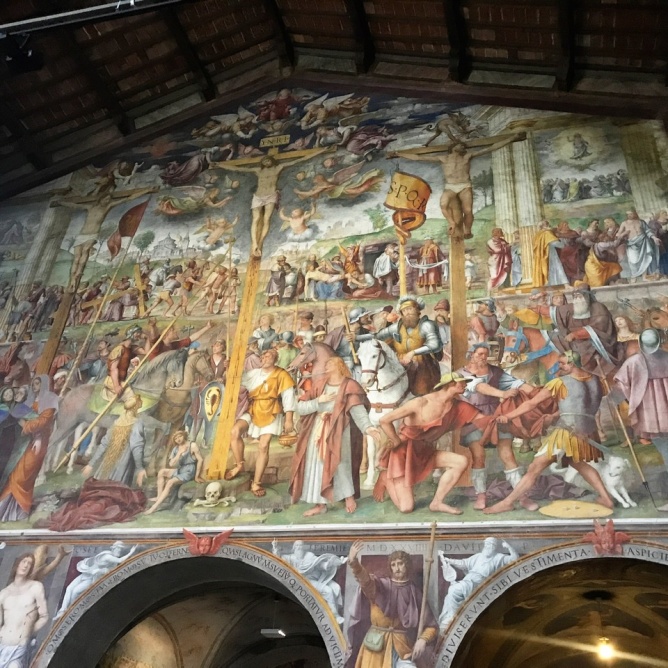 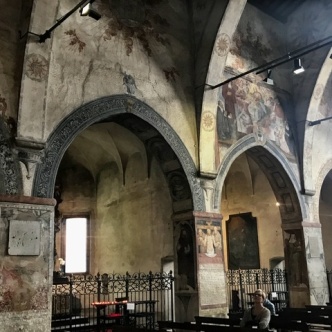 After the sightseeing, we headed towards Bellinzona. We bypassed the series of urban agglomerates around Lugano and Agno by taking the train to the village of Taverne-Torricella (on the bike path and a 7 min train ride from Lugano).

From there, we biked 30 km mostly along hilly country roads and villages until the farm fields of Bellinzona. Overall, the route was not particularly scenic. 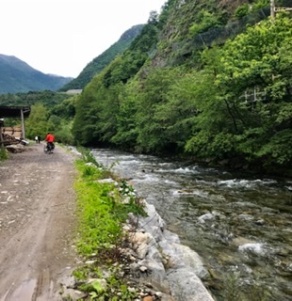 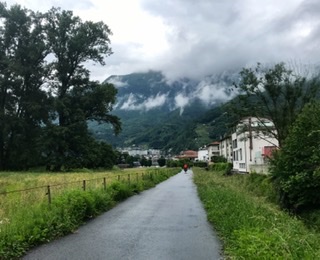 Bellinzona was a beautiful surprise. Like Lugano, you see the Italian influence in the style of renaissance and neoclassical buildings, and in the splendidly decorated patrician houses and alleyways , but with the manicured touch of Switzerland. Boutiques, cafés and restaurants dot the charming old town. 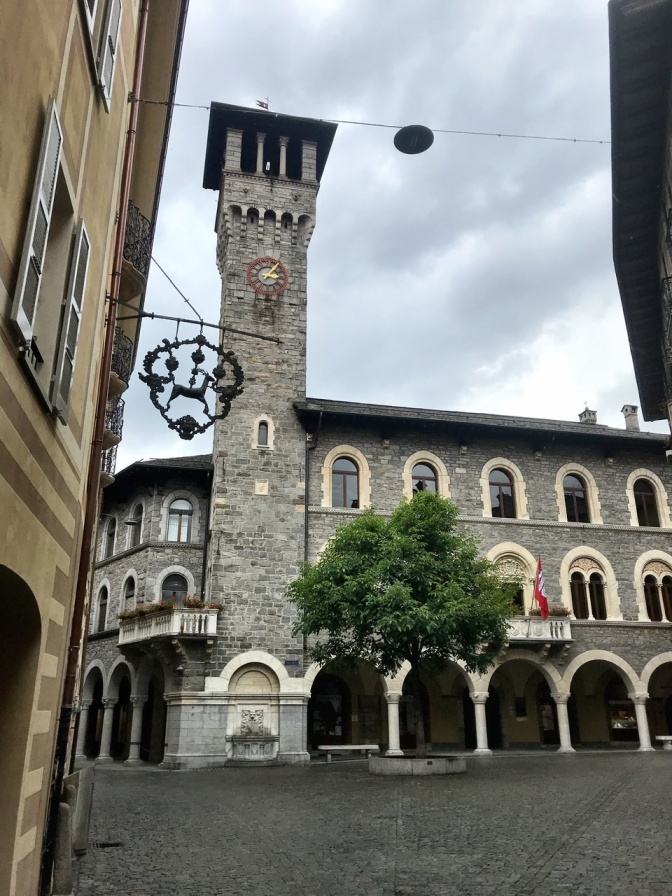 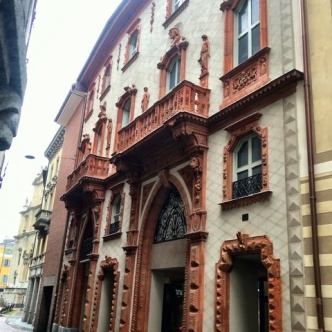 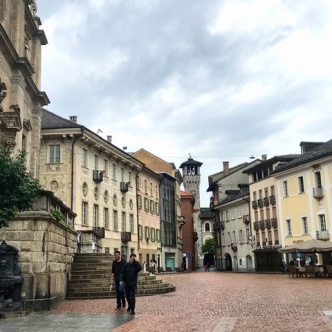 Its strategic importance along the routes of major Alpine passes (like the St. Gotthard and San Bernardino) led to the construction /enlargement of the 3 castles during the Lombardy-Sforza period (15th century).

These beautifully preserved strongholds, which define the Bellinzona skyline, are important examples of medieval fortification and now part of the UNESCO World Heritage. They were not built as palaces for the aristocracy but as defensive fortresses to control the valley. Thus, they consist mostly of a couple of towers and fortified walls and walkways where soldiers would station. Each “castle” can indeed be visited in less than 30 min. All three contain exhibitions/museums and a little restaurant

Castelgrande (13th-15th century), situated in the middle of the town, is the oldest and largest of the castles and affords a great view of the valley and of the other 2 fortresses . To reach the top, one can take an elevator built inside the rock and accessed through an award-winning concrete tunnel. I highly recommend to go though it. 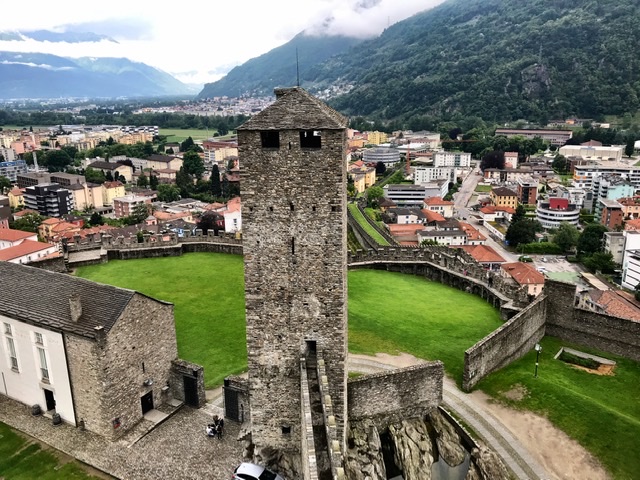 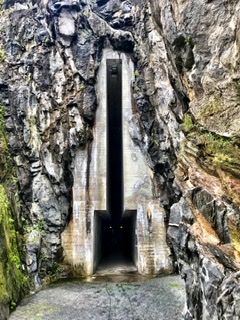 The Castello di Montebello, the middle of the three for size and location, was my favorite, with its drawbridge and older buildings . 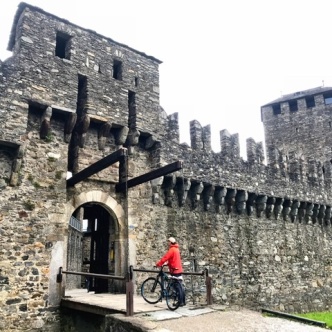 Lastly, the Castello di Sasso Corbaro, is the smallest and the furthest. Built also by the Sforza high up on a rocky hill, it is mostly a large fortified tower that can be visited in 10 minutes. From there, one has unobstructed view of the entire valley. 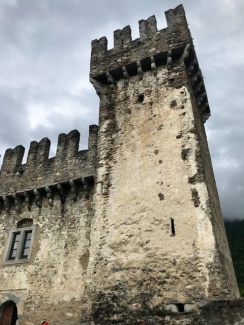 At night, we stayed in a small comfortable hotel (Hotel Croce Federale, http://www.hotelcrocefederale.ch/index.php/en/) in the middle of the old town, with a good restaurant, and close to the train station.