Stats from SwitzerlandMobility.ch (www.veloland.ch/en/routes/etappe-0912.html): 47km long, height difference Meiringen–Spiez 480 m (460m in the opposite direction). Their site has the full profile.

We continued onto this Section after coming off Route 9:05  (started the previous day), but it can be continued also after Route 8:1
From Meiringen (see 9:5), we biked for a few kilometers on a flat valley surrounded by farmland, cows, and vertical mountain walls, until Lake Brienz.

At Lake Brienz (Brienzersee) we detoured slightly to the northern side to visit the village of Brienz.

Brienz (m.myswitzerland.com/en-ch/brienz.html)
The town lies on the northern shores of the lake and has amazing panoramas, with the surrounding mountains reflecting in the clear turquoise-blue lake. The old part of Brienz is really charming. The village is known for its woodcarving heritage (seen in the facades of houses and in wooden statues along the streets), and for the famous Brunngasse (once thought to be the most beautiful street in Europe). Nowadays, this street is definitely overrated: although well kept, there are many other streets in Switzerland that are similar or better.
Instead, what really hypnotized me was the little old chapel overlooking the lake and adorned with the characteristic red flowers. The views from here were stunning. 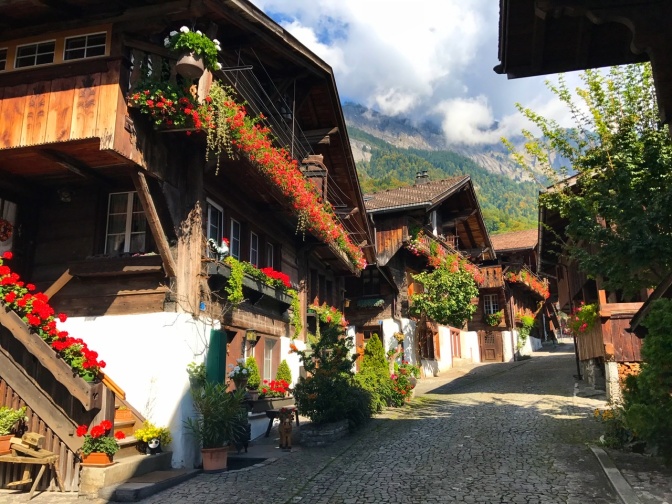 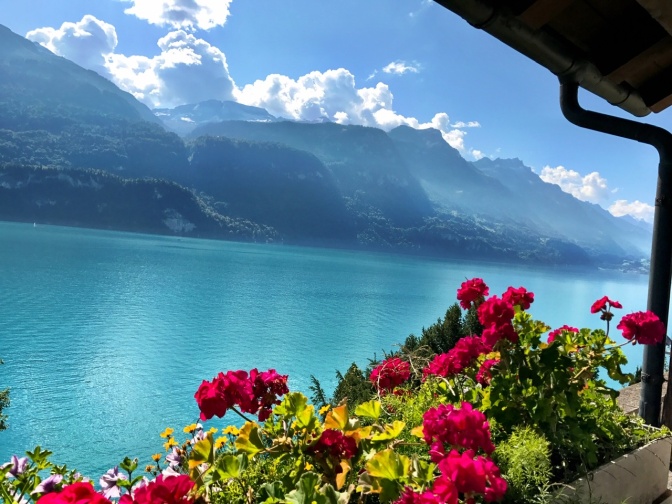 Leaving Brienz, we went back and biked the southern side of the lake along low traffic roads. The views of this quiet lake were really spectacular and the intense blue-green color seemed purposely retouched.
A forested path (en route) led us to the powerful Giessbach waterfall. At the foot of the fall, a majestic old Grandhotel (Giessbach) suddenly appeared in front of us, nestled between the fall and the lake. Going through the hotel outdoor areas, we felt transported back to the Belle Époque period. 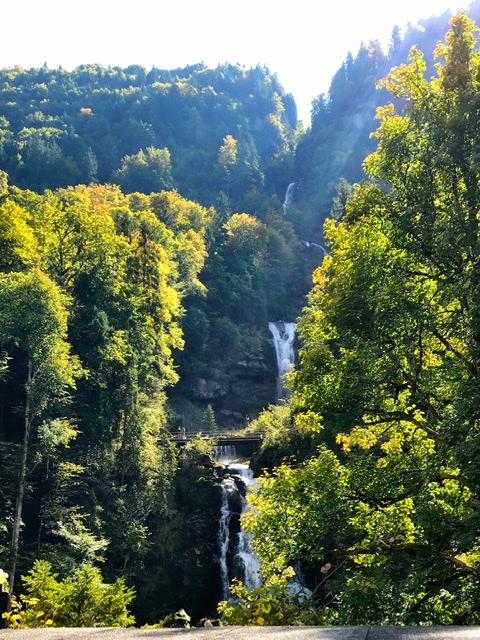 From there, the path continued unpaved in the forest for several kilometers. Through a break in the trees, we spotted an enchanted panorama with the village of Iseltwald jutting into the lake.

At the end of the lake, we decided to stop for a picnic lunch along the shore in the village of Bönigen (www.myswitzerland.com/en-ch/boenigen.html)
This is another cute village, famous for its centuries-old, richly decorated homes.

Arriving in Interlaken after the peaceful and deserted ride was almost shocking.
Interlaken (situated between the two lakes as the name implies), is a bustling tourist destination full of contrasts: modern watch and jewelry stores catering to bus-loads of Asian tourist, roads full of people, well preserved old buildings in the quieter historic quarter, and impressive views of the peaks of the Jungfrau region. 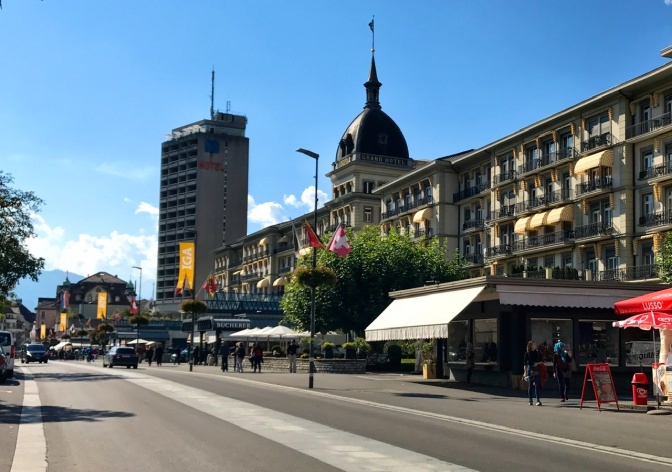 Biking along the southern shores of Lake Thun was not that enjoyable. Although the path coasted the lake, with its deep-blue waters, it was also next to the major road, full of noise and traffic, spoiling the otherwise beautiful views.

At last, we arrived in Spiez, ready to take the train back home. Spiez’ landmark is its castle overlooking the lake, a must-see building that I had already seen in previous trips (9:03 & 8:03).

Links to Introduction & other Sections of Route 8: