Overview of the entire Route 1 (Rhone Route: Andermatt to Geneva): This biking Route follows closely the Rhone river along its linear path through Switzerland. The river starts from the homonymous glacier in Swiss Alps near the Furkapass. It then travels westward through the valley of Valais to empty in the eastern part of Lake Geneva. It emerges to the opposite side, near Geneva, where it turns south-west to travel across France, passing through Lyon and Avignon and finally emptying in the Mediterranean Sea, south of  Arles.  The actual Route 1 starts a bit before the Rhone Glacier, in Andermatt (part of the St Gotthard massif and in Canton Uri). The town is situated in an alpine valley in the south-central part of the country and is a crossroad of several biking routes. From Andermatt, Route 1 climbs about 1,000m to the Furkapass. Here, at the Rhône Glacier, starts a fast descent following the young Rhone river all the way to Lake Geneva, to finally end in Chancy (near Geneva) at the southern border with France.

SwitzerlandMobility.ch ( http://switzerlandmobility.ch/en/cycling-in-switzerland/route-01.html ) gives the total length of Route 1 as 350km, divided in 8 sections (total ascent 3,600m/descent 4,600m). Route 1 also belongs to one of the major European bicycling routes (Eurovelo 17,eurovelo.com). Apart from Section 1, which has a strenuous long climb and passes near various glaciers, all other sections (2-8) are relatively flat and easy, running through the Rhone valley and along Lake Geneva. The route’s low altitude at around 350-600m (except for Section 1) makes it ideal for rides in colder periods.

Stats of the 2 sections: Total length 88 km with a height difference of about 1300m Andermatt–Brig (2100m in the opposite direction). SwitzerlandMobility.ch has the full profile. Note that there is a 900m ascent in the 13 km from Realp (1538m) to Furkapass (2429m). Furkapass is open only in the warm months. The first section of Route 1 is on a busy road. The second section, instead, is mostly on unpaved trails country and forest.

We arrived in Andermatt the night before and we stayed at a charming historic hotel in the middle of the village (Hotel Restaurant 3 Könige & Post ).

Andermatt (andermatt.ch/en/) is situated in a scenic high valley in the heart of the Alps, at the crossroad of many hiking and biking trails towards all directions of Switzerland and near various mountain passes. It has connected southern to northern  European routes since the medieval times.

We left Andermatt after a filling breakfast of muesli, fruits and eggs. After about an easy 10km, we arrived at Realp. Here we started the long, strenuous and serpiginous road to the Furkapass. 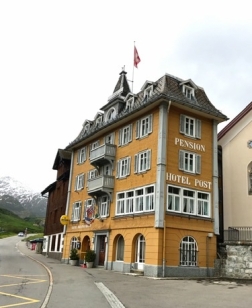 Furkapass (dangerousroads.org/europe/switzerland/152-furka-pass-switzerland.html)
We climbed the Furkapass in drizzle and clouds so we could not see the amazing views from the top. Deep snow was still present along the road of the pass. Furkapass (2,429m) is in fact one of the highest passes in Switzerland. Its serpiginous road was immortalized in James Bond’s Goldfinger.

After the pass, we found almost immediately the Rhone Glacier, next to the road.

Rhone Glacier & Ice Grotto (obergoms.ch/summer/alpinepasses/icegrotto.php)
Although many websites make a big deal about the Ice Grotto, I think the Glacier itself is far more stunning. Apparently, here is also the closest point one can get to any glacier in Europe. Very cool is also to see the actual source of the Rhone river, which can be spotted as a little stream coming out from the glacier lake.

The Ice Grotto is an artificial walkable ice cave, about 100m long, carved anew every year inside the glacier itself. Its position changes based on the glacier movements. 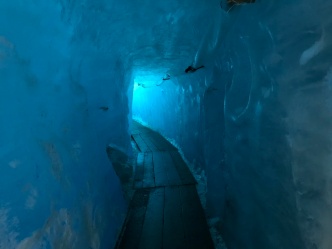 Passed the Glacier, starts an amazing freewheel, many kilometers long, up to Oberwald. However, the road is dangerous in busy season or in bad weather.

With Oberwald, the Route continues along meadows (almost flat) and a series of old villages with sun-browned timber houses (typical dark wood old chalets). Some of the houses were built centuries ago to combine working areas and living quarters.

The last hills are in the Binntal landscape park. This is a large nature park just west of Brig (landschaftspark-binntal.ch/en/der-park/naturpark.php). The trail through this forest is unpaved and with steep uphill passages. It also crosses a gorge via an old stony bridge.

After the Binnental forest, the route starts finally descending  until Brig.

In Brig (photos in 1:03), we took the train back, but only after biking around the beautiful and imposing Stockalper Palace (brig-simplon.ch/stockalperpalace/).

Here are the links to Introduction and other sections of Route 1:

6 thoughts on “Route 1: Sections 1 & 2 cycling Andermatt to Furkapass to Oberwald to Brig, Switzerland”